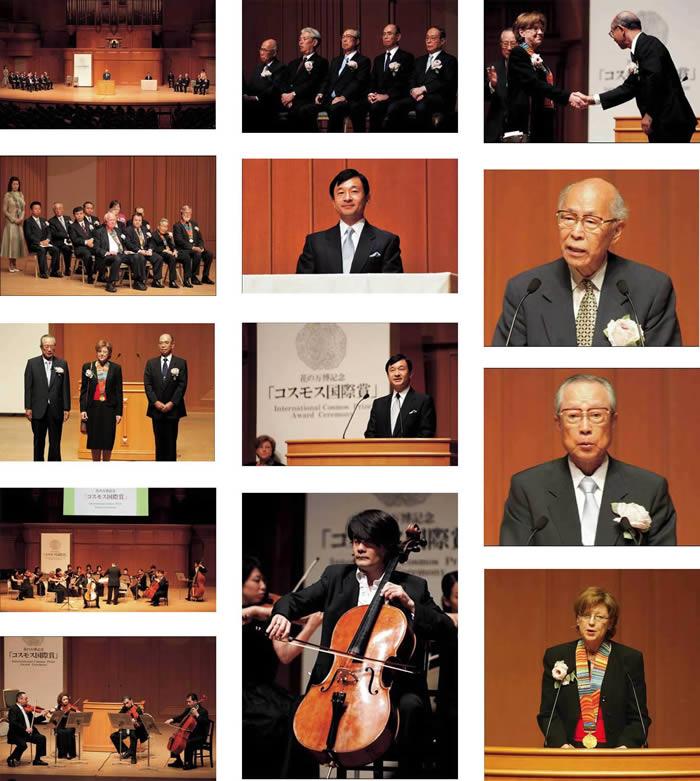 The Award Ceremony for the 2007 (15th) International Cosmos Prize was held at Izumi Hall, Chuo-ku, Osaka City, on October 4th, 2007, in the presence of His Imperial Highness the Crown Prince, who was the Governor Emeritus of EXPO '90. Some 450 participants attended the event, including distinguished guests from Japan and abroad. At 2:30 p.m., the Ceremony commenced with dignified music played by a string ensemble. The Chairpersons of the International Cosmos Prize Committee and the Screening Committee of Experts took the dais and introduced the members of their respective committees.

After HIH the Crown Prince proceeded to the platform, President Makino declared the Ceremony open and Chairperson Imai delivered an address on behalf of the host organization. Then, Dr. Akito Arima, as Chairperson of the International Cosmos Prize Committee, introduced the prizewinner and presented the reasons for the award. Dr. Georgina Mace, the 2007 Cosmos Prizewinner, took the platform to a warm round of applause. Chairperson Arima described the prizewinner selection process.

Dr. Georgina Mace was awarded a commendation, a supplementary prize and a medallion by Chairperson Imai and Deputy Chairperson Nomura. HIH the Crown Prince then honored the Ceremony with a congratulatory message.

Finally, Dr. Georgina Mace delivered the prizewinner's address. A further round of applause for Dr. Mace brought the first section of the Ceremony to a close.

In the second, celebratory, section of the Ceremony, introductory images of the prizewinner were presented on the screen. The ceremony was concluded with celebratory musical performances by a cellist and the ensemble. 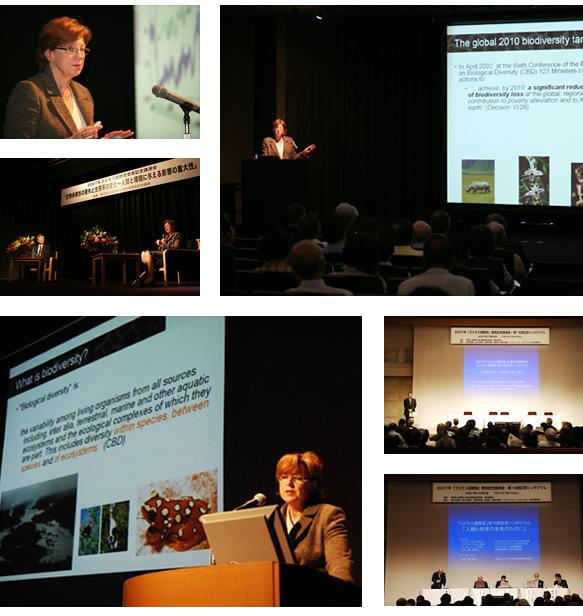 Lecture meetings for the International Cosmos Prize in 2007 were held under the theme "Biodiversity Loss and Ecosystem Change: Consequences for People and the Environment," at Kyoto University, Sakyo-ku, Kyoto, on October 2, 2007, and at Tokyo FM Hall, Chiyoda-ku, Tokyo, on October 6.

Dr. Mace stated in her lecture that despite an international commitment made in 2002 at the Conference of Parties to the Convention on Biological Diversity as well as at the World Summit on Sustainable Development to reduce species extinction rates by 2010, extinction rates still appear to be rising. She also stated that due to the potential impacts of climate change, the rates would increase into the future by another order of magnitude or more, which would have serious consequences for human activities. She emphasized that we should appreciate the importance of biodiversity and enhance ecosystem services through biodiversity conservation.

2007 marked the 15th anniversary of the International Cosmos Prizes, established in 1993 to commemorate the International Garden and Greenery Exposition (EXPO '90) held in 1990 at Tsurumi-ryokuchi Park in Osaka, under the main theme: the Harmonious Coexistence of Nature and Mankind. The purpose of establishing the Prizes was to perpetuate the spirit of EXPO '90 by commending individuals and groups that have contributed significantly toward making that theme a reality.

The Anniversary Symposium, held under the theme "For the Future of Humankind and the Earth, "featured discussions on various topics, including the advance of global warming, the biodiversity crisis and the roles of science and scientists in addressing these and other environmental problems.

At the High School Visit by Prizewinners, students were eager to participate in discussions. Since they had prepared well for the program, the Q&A session was particularly vigorous. By asking many questions of the prizewinners, students learned the reality of environmental problems, as well as clues to resolving them. The event provided the high school students with an excellent opportunity to deeply consider ways of seeking optimal balance between social development and environmental preservation.